Cast Your Bread upon the Waters

I have been going through the daunting task of selling my home. Literally, months of preparation have taken place. The house was suffering from years of neglect simply because financially things have been difficult for me, especially since my husband’s death six years ago. The interior was dark with dark brown doors on all of the rooms, a tired kitchen and gold and blue bathrooms. The exterior? Well, that is a long, complicated story. Suffice it to say, in this house every time I turned around, some new issue had reared its ugly head. But this is where I can truly say, God is in control. END_OF_DOCUMENT_TOKEN_TO_BE_REPLACED

Last weekend I rode the Ducks in Branson, Missouri. For those of you who are familiar with Branson, the Duck Tour is one of the most popular tourist attractions there. It is fun, and a treat to hear the Captains of the amphibious vehicles as they guide you on the tour.

As we took in the area around Branson, we drove up up Bear Mountain. Partially up the mountain there is a rock clearing with old military vehicles. While driving through the site a narrative plays, explaining which war the vehicle was used in and the primary role of each of the vehicles. We saw tanks, Jeeps, and a various assortment of vehicles. 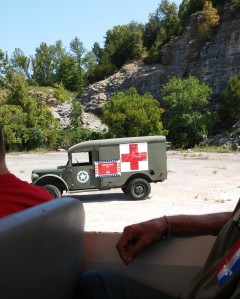 I have been on the Duck tour before, but this time it took on a special significance to me and I saw it from a new perspective. That was because my brother-in-law, Steve, is a Vietnam veteran, and he and my sister were with me on the tour. Steve was a medic in Vietnam and served mostly on the front line with the ground troops. They generally used helicopters to evacuate wounded soldiers, but as we approached the ambulance, he noted it was the type of ambulance they used in other areas. END_OF_DOCUMENT_TOKEN_TO_BE_REPLACED

In preparation for getting my house on the market, I have been doing quite a bit of “purging” lately. Some things are easy to let go of, some are not. I am a real book junkie and have (literally) hundreds of books in my home. I gave away about 100 books to our youth minister, whose organized wife probably cringed when he brought them home!  I have donated many to the thrift store, but still have four bookshelves full of books! Even though I now put many of my books on my Kindle, I still love the feel of opening a book and perusing it’s pages, awaiting the marvelous things I discover within.

But I digress. What really started my thoughts going today is going through my “keepsake” box. You know, the kind that several of you have hidden away in the basement or stuffed in a cedar chest, or maybe in a drawer. The smell of old papers wafted to my nose as I opened the box. And so began the assault on my memories.